S #ReportWithPride | You must start thinking of trans as a creative space: Vikramaditya Sahai 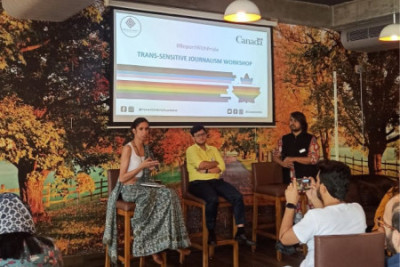 #ReportWithPride | Media has to reorient what expertise on a community means: Dhrubo Jyoti

There’s an over-emphasis in biology as explanation for all trans things right: we see this, particularly today, when both radical anti-trans discourse, and actually a certain kinds of feminist discourse, rely on languages of where we come from, as the language.

So whether the sports federation says trans people cannot compete in this gender category, they're using a certain category or certain imagination of sex, which is really outdated.

And on the other hand, certain kind of feminist world has also relied on this language of "assigned male at birth" and "assigned female at birth."

There is this kind of larger language of biology as explanation for how we negotiate the social good, and that is where the disappearance of non binary and gender nonconforming folks practically happens. Because not only are they kind of moving away from a kind of cis conversation, but they're also moving away from a trans-normative conversation.

Actually the days of imagining trans as transitioning or beyond a gender, which is the conversation about the 'third gender' are actually behind us.

You must actually start thinking of trans as a creative space that people use to make something of their life. And so each person's trans conversation is different from the other. And of course, no media outlet can do justice to the diversity of how people experience transness in their own lives, and then, of course, amongst people, but actually, the ways in which trans is constantly made to be about gender, is actually where we're constantly faltering because the conversation about gender is a conversation about the regulating trans lives.

So, actually, we might want to move away from those tropes.