S #ReportWithPride | Media has to reorient what expertise on a community means: Dhrubo Jyoti

#ReportWithPride | You must start thinking of trans as a creative space: Vikramaditya Sahai 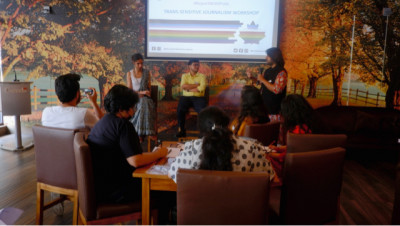 #ReportWithPride | You must start thinking of trans as a creative space: Vikramaditya Sahai

Start with the Criminal Tribes Act, learn about how trans people were outcast: Satvik Sharma

Dhrubo Jyoti (They/Them) is an Assistant Editor at Hindustan Times. Dhrubo writes on national affairs at the intersection of caste and sexuality. They are one part of the Queering Dalit Collective, and are closely linked to the movement around caste and sexuality in South Asia that aims to de-center upper-caste voices from the centre of LGBTQIA+ movements. They write narrative non-fiction centered on casted experiences of love and desire in South Asia.

Jyoti summarizes Sahai’s points on ‘Reporting it Right’ (edited, in the speaker’s words):

Three important points: one is about collapsing the diversity of trans narratives into a bare-bones of celebration or violence.

The second is the question of centering voices – who is a trans person, and who's an ‘expert’ on trans lives? And that if that ‘expertise’ has to constantly go towards either medicalization or towards people who are outside the community but have "studied" trans people. So then we as media folks have to reorient who we think of as an ‘expert’, and what ‘expertise’ on a community means.

The third point is in terms of the bareness of trans excitation. When we think of doing a "story" on a trans person, what is it that we're thinking of doing, what people are we thinking of interviewing, and again, is it a barebone story of only either celebration or violence.

Satvik, you've spoken about how different forms of portrayal are harmful. What are the ways in which these wrong portrayals can harm trans folks?