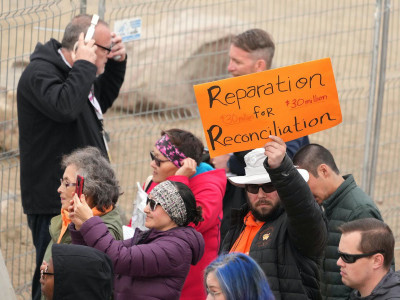 Many people are contemplating Pope Francis’s recent apology for residential schools in Canada during his visit to Alberta, as well as his statements from Québec City and Iqaluit. In the aftermath of historical atrocities, apologies can offer a sense of justice and acknowledgement for people who were the targets of institutional violence.

People are looking for two things:

Authenticity — Are the Pope’s statements a genuine reflection of the church’s “penance” and commitments to change?
Responsibility — Do the Pope’s statements demonstrate willingness and resolve for the church to address systemic causes and effects of specific harms?
Many are waiting to see if the Roman Catholic Church will take institutional responsibility for genocide, sexualized abuse, torture and the deaths of thousands of Indigenous children.

A more fulsome apology would acknowledge the church’s wrongdoing, and complicity with the Canadian settler-colonial state, to suppress Indigenous resistance in order to access land. The links between extracting resources and taking children from Indigenous communities, and attacks on communities throughout this process, have been obscured — and reparations have a role addressing this.

Violence prevention
As a Métis scholar, with Cree and Gwichin ancestry, I have been committed to improving the conditions and well-being of Indigenous people in Canada.

I was recently lead researcher on a project at Concordia University called “Indigenous Healing Knowledges.” One insight shared by many survivors at a related conference where Elders, Knowledge keepers and Indigenous youth offered teachings about their experiences and approaches to healing, is that people are more likely to recover — and promptly — when the violence against them has been acknowledged and not minimized.

Recovery is more likely when they have been made safe, received care and have been treated with dignity.