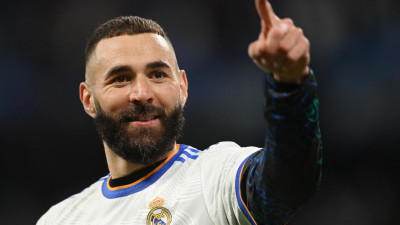 Exists as Europe's most prestigious club, and many players have had the honour of wearing this jersey and representing them in many major competitions. Madrid has produced a number of eye-catching players, particularly strikers who have gone on to score a plethora of goals in this white jersey.

Big names like Sefano and Gento have worn this shirt, and many others have won the Ballon d'Or and the Golden Boot. This article will rank Real Madrid's top strikers.

Vinicius may be too early on the list, but he has emerged as a promising Real Madrid prospect. Coming ascending the ranks of Real Madrid Castilla, Vinicius had a shaky start to his senior team, but he turned his fortunes around under Carlo Ancelotti and became a potent attacker, with his burst of pace and trickery, dribbling making him the superior player on the pitch.

The Brazilian hero is now a regular starter for the club, having scored 42 goals in 179 appearances.

Santos Robinho was the best striker in Brazil, and his performance for the Brazilian club impressed many European clubs; he was approached by several teams but chose Real Madrid. In his first season at the club, the player scored double digits but did not shine in the second, but he rebounded and scored 15 goals before permanently falling down the goal-scoring ladder. In 135 games, he managed to score 35 goals.

Higuain is an unsung hero who has been overlooked by many Real Madrid fans. The player was one of the best strikers in the club, but he did not get much glory due to Ronaldo and Kaka, but the player kept delivering and has etched his name in club history. He is unquestionably the king, and he excelled as a pure false nine.

During his career, he was a deadly striker who could score from anywhere. Higuain may have been overlooked, but he is still a great striker. He scored 121 goals in 264 games during his six years at the club.