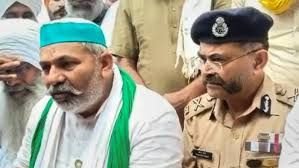 Amidst the hullabaloo over the Yogi Adityanath government's strong arm tactics in delaying the movement of Opposition leaders to Lakhimpur Kheri, this seems to have escaped attention: What provoked or inspired the UP government into facilitating the entry of Bhartiya Kisan Union leader Rakesh Tikait into Lakhimpur Kheri on the very night that the ghastly and spine chilling incident of the killing of farmers happened?

Within 24 hours of reaching, Tikait - along with senior officials of the UP government -was successful in having a compromise formula agreed upon with the agitating farmers who had been unwilling to cremate the dead. When the agreement was threatening to collapse on Tuesday morning, Tikait stepped in again to convince family members of the fourth dead farmer to accept the deal.

Nothing misplaced about the deal: A compensation amount of Ra. 45 lakh to the family of the dead and Rs 10 lakh to the injured, apart from the promise of a government job to one family  member of the deceased farmers. It was also agreed that a FIR would be lodged against Ashish Mishra, while appropriate action would be taken against his father Ajay Mishra, the Minister of State for Home.

Because of Tikait's timely and swift intervention, the Yogi Adityanath government was able to bail itself out from what might have emerged as an even more volatile situation.But, such questions are anyhow being raised: Did Tikait agree to become Yogi's troubleshooter to prevent the ongoing farmers agitation from turning violent? Or, is the sharpness of his anti BJP position getting blunted?

Apart from the aberration of the protests during this year's Republic Day when farmers groups hoisted their own flags at the Red Fort, the 11-month long protests have remained peaceful. The possibility of an escalated violence at Lakhimpur Kheri could have provided to the BJP the handle to discredit or oppress the farmers further. To that extent, Tikait appears to have played a mature and sensible role. But his outing at Lakhimpur Kheri also appears to have provided an opportunity to the BJP to discredit him and cause fissures in the leadership of the farmers groups.