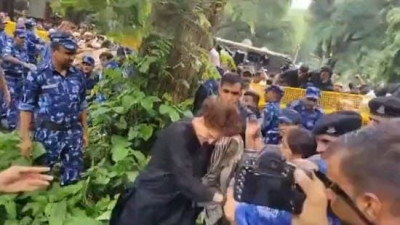 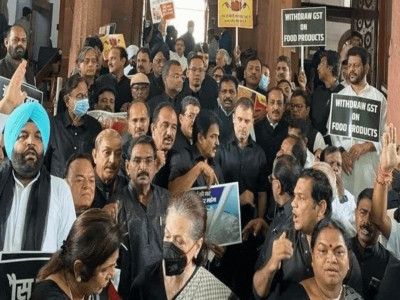 Delhi Police detained Congress politician Priyanka Gandhi Vadra Following her participation in a protest against unemployment and inflation with other party members and supporters, outside the party's headquarters in Delhi.

In the footage, Priyanka Gandhi can be seen being dragged into the police vehicle by five to six female constables.

In order to take part in the protest, Priyanka Gandhi was earlier observed leaping over a police roadblock positioned close to the AICC headquarters.

Dramatic scenes were witnessed in the capital as Congress stepped up its opposition to rising prices and the GST. The Delhi Police detained a number of Congress leaders, including Rahul Gandhi and Priyanka Gandhi Vadra. As Priyanka failed to obey and made an effort to resist being detained by sitting on the road, the situation worsened. Finally, she was dragged by officers, pushed into a car, and driven away.

"The dictatorial regime began to shake when we raise the voice of the people. And they act in this way out of fear. However, Congress will not give in, the party's official Twitter account tweeted

Rahul Gandhi, claimed that the police beat some MPs who were participating in a protest "All of the Congress MPs marched to Rashtrapati Bhawan to discuss inflation and rising prices, but they are preventing us from moving forward from this point. Our responsibility is to voice the concerns of the people.

Rahul Gandhi launched a ferocious attack on the Modi government during the conference that was held on Friday. He asserted that India is currently experiencing the "onset of dictatorship" as a result of the way the Center has unleashed its agencies against the opposition.