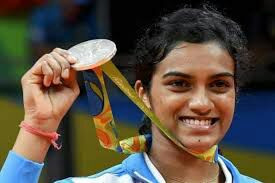 What once seemed like a distant dream is finally a thing of tangible reality as World No. 7 shuttler PV Sindhu will be heading to the Tokyo Olympics, eager to win a second Olympic medal and hopefully, upgrade her Rio silver to a Tokyo gold.Around this time five years ago, PV Sindhu was a footnote among all the headlines before the Rio Olympics. "Back then it was, 'Okay, Sindhu is just going to the Olympics'", she says. "Now, everyone expects a medal from me."
Sindhu was a shock revelation in Rio -- coached into screaming to undo her "timid" image, filling our TV screens with her fight and grace in a final of tangled emotions, her silver medal allowing India to double its underwhelming medal count two days before the Games ended. Today, she's without a doubt the most recognised face in the Indian contingent.

Now, at 26, in the prime of her career, Sindhu stands on the brink of Indian sporting immortality that a second Olympic medal will bring her. She's following a punishing fitness regime for it -- after a disappointing series of results during the Asia leg of tournaments in February, she did a 10k run under the mid-morning Hyderabad sun, clocking 25 laps of a modest-sized cricket field in 55 minutes. But her anticipation isn't betrayed by the stock anodyne quotes: "hard work", "coming back stronger", "giving 100 per cent".