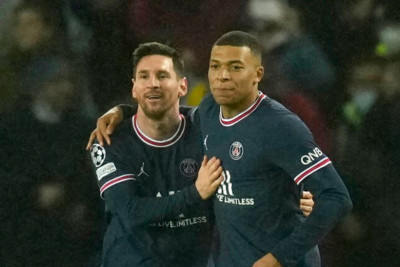 Paris Saint-Germain striker Kylian Mbappe is being treated for a groin strain with their Champions League game against Real Madrid less than a month away.

“Mbappe in is treatment for a pain in his left adductor and we will give a fitness update on Friday," PSG said Wednesday.

The 23-year-old Mbappe, who is tipped for a move to Madrid when he becomes a free agent at the end of the season, has been one of the club’s top performers again this campaign.

With ten goals and eight assists in the league, Mbappe has outperformed both Neymar and Lionel Messi while his four goals in the Champions League helped carry PSG into the last 16.

In better news for the Parisians, Messi appears to be in the frame for a return to action on Sunday when they host Reims after the Argentine caught Covid over the New Year holiday period.

Neymar has been ruled out since November with an ankle injury.

PSG hope all three attackers will be fully fit for February 15 for their Champions League first leg match with Real.

Mbappe recently brushed off speculation he would be joining Real Madrid before that clash.

“The main thing I have in mind is beating Real Madrid in February and in March," he said.

In October Mbappe confirmed he had told PSG last July he wanted to leave the club.