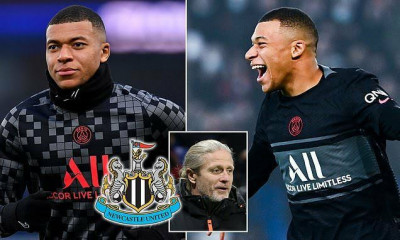 Mbappe, who moved to PSG from Monaco in 2017, has scored seven goals in all competitions for PSG this season but has endured a tricky start, showing his frustration with star team-mate Neymar on one occasion.

His contract at the Parc des Princes expires next year and the French World Cup winner has been heavily linked with a move to Real Madrid - yet compatriot Petit insisted that Newcastle's new-found wealth makes them a contender too.

'We see what's happened with Newcastle United – there have been rumours and you never know what's going to happen at the end of the day, things could turn very easily and very quickly.

'There is a big link with Real Madrid and I know that in his mind when he was a child he was dreaming of playing for clubs like this, because of the stars they have there and the history of the club.

'I think he's been frustrated and tired by the situation at PSG over the past year. We've seen some trouble on the pitch between players both at Paris Saint-Germain and the national team, which was reflective in his game and his mood.

'Maybe he's interested in Real Madrid because he's tired of what's happening here in France. I think he gets the feeling sometimes that he doesn't get the same recognition as players like [Lionel] Messi or Neymar.

'Messi, before he came here, he was the king of Barcelona. But for me, the king of Paris Saint-Germain is Mbappe, not Messi or Neymar. With all the respect I have for Messi, Mbappe is still number one.'