PSG settle for a draw 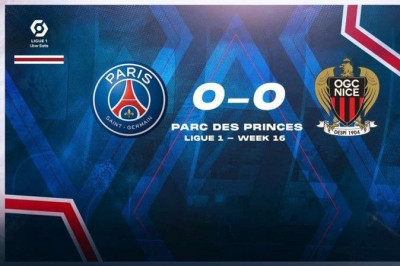 Just three days after their victory in the snow in Saint-Etienne, the Parisians were back in the magical Parc des Princes. And if the fans' passion was shown to the Ballon d'Or award winners before kick-off, Mauricio Pochettino made the pleasure last, by lining up with Leo Messi and Gigio Donnarumma in his 4-3-3!

From the outset, the Parisians had all the ingredients to get into the Aiglons’ half: intensity in the duels, fast counter-attacks from Kylian Mbappé, and their was a first attempt from Dina Ebimbe (7'). And if the Parisians were clearly dominant in midfield with a lot of possession, it was another night of impressive goalkeeping, a few days after they came up against an inspired Etienne Green!

At the Nice end, Walter Benitez had to make a double save from Kylian Mbappé (27'), stop Di Maria's attempted lob (50') and deny Nuno Mendes' powerful shot (51'). On the other side of the pitch, despite the fact that Kimpembe and Marquinhos were on fire, Gigio Donnarumma also had his gloves warmed up by deflecting a powerful shot from Dolberg (9'), making an incredible point-blank save from Andy Delort's header (31'), before being miraculously saved by his post from a Dolberg effort (58').

The Parisians began to suppress the Aiglons in their own half on the hour mark, but they had to be patient to find the breakthrough. Despite a late surge of pressure from Paris, Mauricio Pochettino's men were unable to find an opening in this tactical encounter.

The game came ended with a draw, despite the Rouge et Bleu's domination. Paris were unfortunate tonight... but they will have the opportunity to get back in the swing of things on Saturday against Lens.