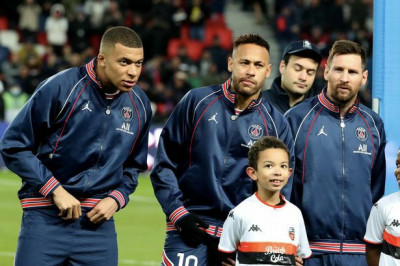 The new leadership of Paris Saint-Germain are ramping up discipline at the club as a priority following their appointments this summer.

Christophe Galtier is the new PSG boss to replace Mauricio Pochettino while Luis Campos has been appointed to oversee transfers following the exit of sporting director Leonardo. They are now working together to ensure greater discipline within the squad away from the pitch.

It comes less than a month after reports surfaced that Lionel Messi and Kylian Mbappe are in 'conflict' over the future of Paris Saint-Germain teammate Neymar, after Mbappe supposedly raised concerns regarding the Brazilian’s lack of discipline and fondness of the Paris nightlife.

There is reportedly an element of rivalry between the two superstars at the Parc des Princes relating to the status of Neymar at the club while multiple reports last season outlined the depth of the dressing room split at the French club. A constant theme in recent years of the PSG dressing room is a lack of discipline and meaningful leadership at the club.

Mbappe opted to sign a three-year contract extension with the Ligue 1 champions earlier this summer, with reports claiming that the striker would hold great sway in the club’s sporting decisions as part of the agreement to extend his stay at the Parc des Princes. Indeed, the appointment of Campos could be linked to Mbappe – who know each other from their time together at Monaco.

The new PSG bosses have now drawn up a list of rules that the players will have to abide to, including relatively trivial issues such as eating breakfast and lunch together being mandatory, while no mobile phones will be allowed at the table to encourage team bonding.

A more serious issue is the club’s banning on player’s going out at nights to the various nightclubs around Paris. It has been claimed that Campos has been in contact with various owners and insiders to ensure that any players attending these night spots will be reported to him.