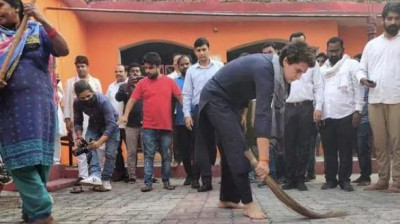 This will also mark the launch of the Congress party's campaign for the assembly elections in the country's politically important state in February-March next year.

Both Priyanka Gandhi and Rahul Gandhi have already set the agenda for the upcoming polls by visiting the families of the farmers mowed down by allegedly by Ashish Mishra, son of Union Minister of State for Home Ajay Mishra.

The images of Priyanka Gandhi cleaning her room with a broom at at the Sitapur guest house where she was detained while on way to Lakhimpur Kheri seems to have galvanised the Congress cadre.

To hit back at Uttar Pradesh Chief Minister Yogi Adityanath, she paid a surprise visit to a Dalit locality in Lucknow and picked up a broom to clean the area.

Adityanath had earlier stated that the people want them (Congress leaders) to be fit only for this and they reduce them to it (janata unko usi layak banana chahti, aur usi layak bana diya).

Taking on the chief minister for his "casteist comment", Gandhi later tweeted that all district committees of the party will clean Valmiki temples.

In the past some weeks, the Congress has been aggressively trying to woo the Dalits and even appointed a member of the Scheduled Caste community, Charanjit Singh Channi, as the party Chief Minister in Punjab.

The public meeting in Varanasi has been named as Kisan Nyay (justice for farmers) rally.

The farmers' issue has given the Congress a revival hope in Uttar Pradesh where it has been reduced to political margins since 1989 and with the emergence of Mandal-Kamandal politics triggered by the Mandal commission for OBC reservation and the Ram Temple movement.

Since then, the Congress has been trying different strategies to rejuvenate itself but failed in every attempt even having an alliance with the Samajwadi Party in the 2017 assembly elections.

It remains to be seen if the grand old party will improve its tally this time.