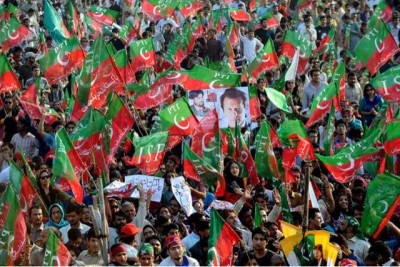 Amidst the accusations of economic mismanagement, Pakistani opposition parties tabled a no-confidence motion against the county’s premier Imran Khan. The lower house of the parliament headed by opposition leader Shahbaz Sharif presented the no-confidence motion before the assembly on the March 28 following which the voting was called on April 3. Bilawal Bhutto, the leader of Pakistan Peoples Party had come out earlier claiming that they had adequate support of the required lawmakers to force out Imran Khan.

On the day of voting, Deputy Speaker Suri, without any delay, disallowed the move terming it unconstitutional under Article 5 of the Pakistani constitution— which affirms a citizen’s or an institution’s 'Loyalty to the State and Obedience to the Constitution and law'. Cabinet Minister Fawad Chaudry referred to the Article 5 and accused the opposition of colluding with foreign powers to tamper with the internal politics of Pakistan. Following the dismissal, The opposition moved to the supreme court to contest the speaker's decision while President Arif Alvi concurrently dissolved the assembly under Imran Khan’s advice and rescinded him as the Premier of Pakistan. Following the ongoing political instability in the country, NSA advisor Moeed Yusuf left office on April 3.

On Sunday, a bench of Supreme Court justices started to look into the case and took cognizance of the situation. The following day, the bench deferred its hearing on the ongoing political and constitutional crisis in the country’s parliament. Chief Justice Umar Ata stated that all the orders passed in the assembly will be subject to the court’s order.

Addressing the nation after the no-confidence move was disallowed, Imran Khan asked the people of Pakistan to gear up for fresh elections. Former Chief Justice Gulzar Ahmed is seen as the prime contender for the interim Prime Ministership after being directly nominated by Imran Khan. However, Imran Khan will continue to perform his duties as the PM until an interim candidate is chosen unanimously by the committee formed by the Speaker of the National Assembly.