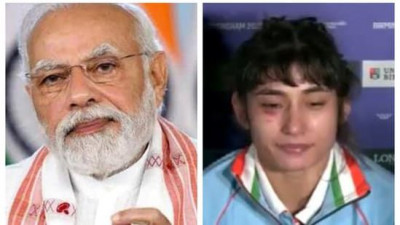 Prime Minister Narendra Modi on Sunday posted a message for wrestler Pooja Gehlot who broke down after winning a bronze and not the gold medal in the Women's Freestyle 50kg category in the Commonwealth Games 2022. "Pooja, your medal calls for celebrations, not an apology. Your life journey motivates us, your success gladdens us. You are destined for great things ahead…keep shining!" PM Modi tweeted, as Pooja Gehlot apologised to the countrymen that the National Anthem could not be played at the event.

"I reached the semi-final and lost. I want to apologise to my countrymen... my wish was that the National Anthem is played here.. but...," Pooja Gehlot said as she broke down in front of the camera. "I will learn from my mistakes and will work on them," an emotional Pooja Gehlot said.

On the second and final day of the wrestling, India won six golds, 1 silver and five bronze medals, three of which were secured by Pooja Sihag, Pooja Gehlot and Deepak Nehra. Vinesh Phogat and Ravi Dahiya won gold in their respective weight categories.

PM Modi posted special messages celebrating the feat of all Indian athletes in the Commonwealth Games 2022. "Congratulations to Pooja Gehlot on winning a Bronze medal in wrestling. She bravely fought throughout and demonstrated exceptional technical superiority through the games. All the best to her for her upcoming endeavours," PM Modi tweeted soon after Pooja won bronze.