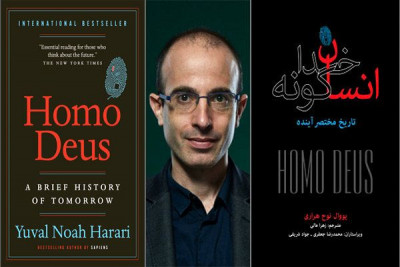 You’ve captured the essence of the book beautifully.

. Collaboration between humans: Humans can work together wonderfully. This feature makes humans much more powerful than other living things. Because humans have the power of imagination, they can work together. Other animals do not have this ability. They can work in small groups like their relatives, but they are not able to work with strangers. While humans are able to work with aliens for a common goal. The power of human storytelling has helped a name that is collectively conceived as a "credibility" to act like a human being and have rights in court. Also like the name of a company that has no external existence at all, but can be trusted as a human being; Be questioned and have real benefits and harms: like Google. There is no such thing as an "external" Google, but the human imagination has given it a global reputation, and millions of people around the world work with it, a product of the human imagination.
In other words, human beings can, with the power of imagination, create imaginary contents and use them as "objective" beings and convince each other: phenomena that are only the product of their imagination are real and act like a human being and have legal personality. Is. Take the Universal Declaration of Human Rights, for example. According to Mr. Harari, "humans are not equal by nature," but everyone must believe that humans are equal in order to survive. Equality of human beings is rooted in a religious doctrine, including Christianity: God created human beings and created them equal, but from a biological point of view, the principle of human equality is in question. Humans are not equal in terms of biological science, because they have different worlds; They are born in different environments and conditions and have unequal biological characteristics. That is, human beings do not have natural rights to equality. What we accept and accept as the equality of human beings is an imaginary concept, born of the human imagination and has no objective reality.