Pacific Islands are back on the map, and climate action is not negotiable for would-be allies 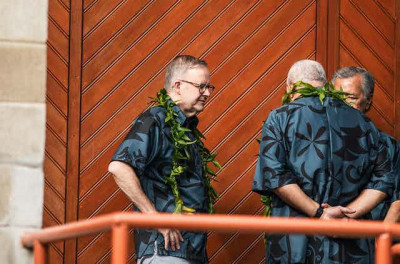 This year’s Pacific Islands Forum marked the beginning of a more dangerous era as Pacific leaders tried to find common responses to both the climate crisis and sharpening geostrategic competition.

There was unprecedented interest in this year’s forum, held in Fiji’s capital Suva. I should know. I lived in Suva for much of my adult life, which included several years teaching at the University of the South Pacific. I was also in town for last week’s summit.

The annual gathering of island leaders and their counterparts from Australia and New Zealand is typically the one time of year when there’s international focus on the region. But this year’s forum was something else. A huge media pack descended, to the bemusement of many Fijians who felt the meeting was divorced from their daily challenges.

Many journalists were there to cover the growing competition between China and the United States, and attempts by Australia’s new government to shore up its influence. Pacific leaders tried to highlight their own priorities, especially climate change.

After the summit, it’s clear these things are connected. Pacific countries know they’re in a fight for survival, and any country that wants their support must show it’s serious about tackling climate change.

Competition returns to the Pacific
When the Cold War ended, Pacific island countries “fell off the map” of global geopolitics. Concerns the Soviet Union might establish a naval base in the Pacific had prompted the US and its allies to step up aid to the region in the 1980s. Once the Soviet threat receded, the US reduced its presence by closing embassies in the region.

This year, Pacific nations are back on the map. A security deal signed in April between China and Solomon Islands – which could allow for a Chinese military presence and ship resupply – has alarmed security planners in Washington and Canberra
Island nations nonetheless tried to keep geostrategic competition off the agenda at this year’s forum.