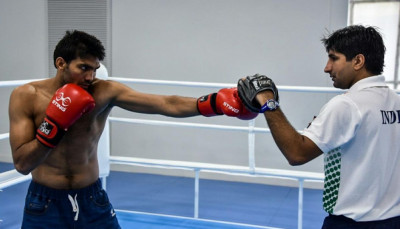 Second time in a row, former boxing national coach Sandhu has recommended the name of Kurukshetra University’s boxing coach Rajesh Kumar for the country’s highest coaching honour, the Dronacharya Award, for the year 2021.

Rajesh is a coach behind the success of double Olympian and Arjuna awardee boxer Manoj Kumar, who had competed in the 2012 London and 2016 Rio Olympics. Manoj also won gold at the 2010 Commonwealth Games and his last major medal was a bronze in the 2018 Commonwealth Games.

“He is one of the few coaches in the country, who are working both at grassroots and at excellence level, starting from talent hunt to producing world class boxers,” stated GS Sandhu in his recommendation to the sports ministry for boxing coach Rajesh.

Rajesh is also an international AIBA two star coach and was the coach with the British franchise ‘The British Lion Hearts’ team in the 2017 World Boxing Series.

“Apart from achieving success in the boxing arena, I am thankful to Rajesh coach sahib for helping me in moving out of poverty. Whatever the lifestyle I am leading today is all because of coach sahib and boxing. Not only me, he has helped many boxers in getting government jobs and majority of these players hail from a very normal family,” says Manoj, who was bestowed with the Arjuna award in 2014. “Rajesh is working at grass root level too and producing top boxers. I want the sports ministry to acknowledge his achievements by bestowing him with the Dronacharya award,” says Olympic medalist boxer Vijender Singh.