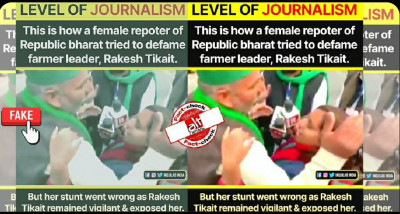 Facebook page Inquilab India, with over three lakh followers, posted a 40-second clip that shows two segments. In the first, a female reporter invades the personal space of farmer leader Rakesh Tikait. In the next clip, we see Tikait accusing another female reporter of inappropriately touching him. The text on the video claims Republic Bharat reporter “defamed” Tikait. This video has gained close to 9 lakh views.

This video has been widely shared online, with many enquiring about it authenticity.

The following video dates back to December 30, 2020. This incident was reported by the YouTube channel News Times 24.

At 1:21 minute mark, we can see that the reporter is holding a Zee Media mic.

On the same day, Zee Hindustan posted a minute-long clip in which the reporter said, “Kindly tell this to everyone that I have been visiting here for 35 days to cover the protest and you treat me like your daughter.” Tikait responded by placing his hands on two reporters and stating, “You are like my daughters.” The reporter added, “This blessing Rakesh ji has been doing since the first day…”

This incident happened on December 1. Tikait refused to respond to a question by a journalist from Republic Bharat. The channel uploaded two short clips on the altercations (0-22 seconds and 22-52 seconds) on YouTube.

Tikait said, “Make a video of them, they misbehave…” to which the reporter responded, “Even we have been subjected to misbehaviour.” The second segment shows a heated argument between Tikait and the reporter. Tikait accused the reporter of touching him inappropriately.

To sum it up, videos of two separate instances of Rakesh Singh Tikait’s interaction with media was shared by popular Facebook page Inquilab India with a misleading claim.