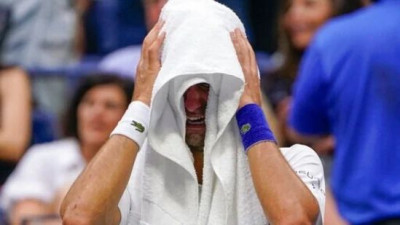 As Djokovic sat on his chair at the changeover before what turned out to be the last game of the US Open final, he began sobbing almost uncontrollably, hiding his welled-up eyes under the white towel. The tears flowed even as he walked on court and paused to receive serve from Daniil Medvedev, who minutes later wrapped up a straight-sets victory.

In what was meant to be a defining match for the Serb that would place him on a mythical pedestal among other tennis immortals, it ended up being the defining image that proved—despite what he made us believe throughout the year—that he is human. The machine had glitched just a little; the steely mind had, for once, softened just a bit.

TV commentators discussed how the women’s doubles final that preceded the match had to be paused briefly because fans were cheering wildly even during Djokovic’s pre-match practice session in the nearby court. People wanted to be part of history as well, and went all out in backing the man. Djokovic is not used to that. The Djoker has never been a fan favourite. Sure, there is respect and applause for him, but seldom unfiltered love and support. He invariably rides against the crowd, not with it, to win matches and Slams.

On Sunday, everyone was rooting for him, with chants of "Nole, Nole" and posters terming him the GOAT (greatest of all time).

For a better part of the 2021 season, the Calendar Slam was all Djokovic was asked about, and it was all he spoke about. The murmurs began with his usually dominant run in Australia, and grew like his legend in Paris after stunning Nadal in the semi-finals and overcoming a two-set deficit to beat Stefanos Tsitsipas in the final. Someone dare stop him this year. Certainly not at Wimbledon, where he completed a hat-trick of titles. Three down, one to go. Throw in the Tokyo Olympics and an even more glorious Golden Slam storyline.