Nehru Era – Establishment of a solid base in science, industry, technology, art, & agriculture 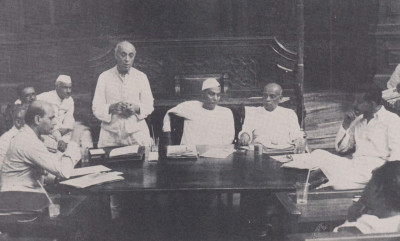 Nehru Era – Establishment of a solid base in science, industry, technology, art, & agriculture

Apart from gaining worldwide recognition as masterly pieces of fine literary quality, these books – 'Discovery of India', 'Glimpses of World History' and 'Toward Freedom (Autobiography)' – serve as ample proof of his in-depth understanding of the cultural heritage of India, the workings of the human mind, and the march of history with all its tribulations and stresses through the ages.

Nehru firmly believed that all that is rich in our precious heritage must be retained to have continuity with the best of our present-day in order to ensure an ideal tomorrow for posterity.

While he was hailed as a moving spirit behind the first conference of Asian Countries in New Delhi in the early fifties followed by the popular 'Bandung Conference' for building the culture of universal fraternity for the newly-independent small and big countries which were either underdeveloped or undeveloped with a weak economic base, Pandit Nehru along with the other two contemporary leaders of his time, namely President Tito of the then Yugoslavia and President Nassar of Egypt became the pace-setter in the area of international
affairs by building bridges of understanding through the institution of the 'Non-aligned Movement' which was founded, nursed and promoted by this famous trinity with their foresight and endless endeavor to act as a balancing force of peace-loving countries in the Cold War era.

About the author - A former union leader & banker PR Chaswal, 78, is a published author and editor of e-patrika Anhad Kriti.

He is a fervent admirer of Pandit Nehru, attended two of Nehru’s speeches in person, and also got an opportunity to perform in a skit for Chacha Nehru in 1955.