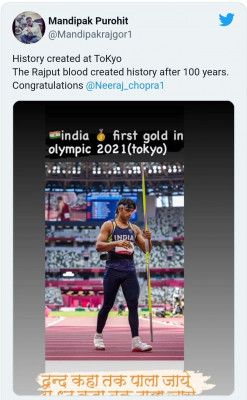 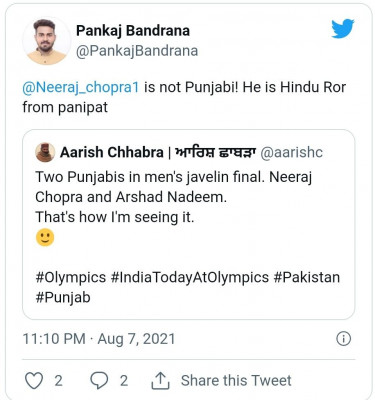 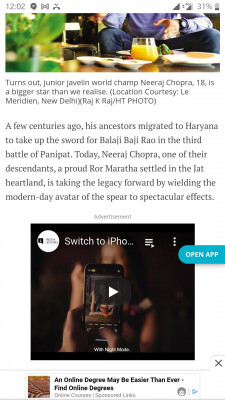 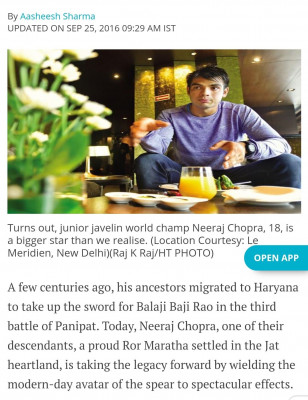 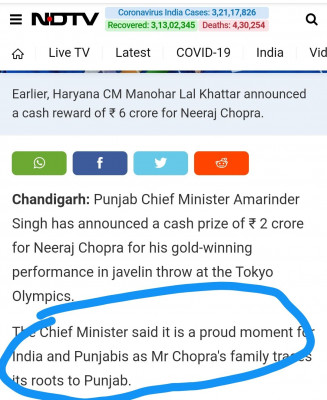 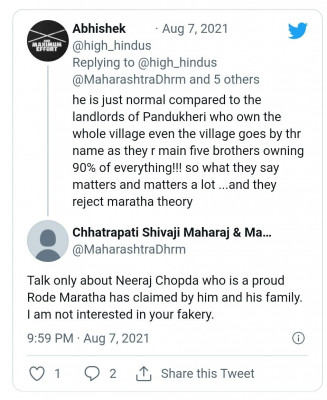 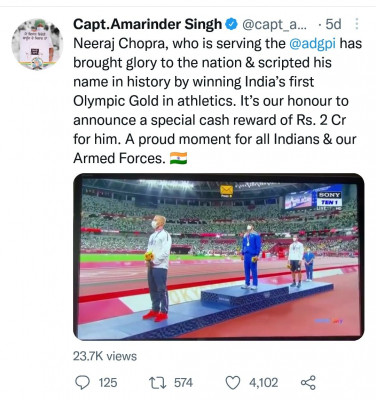 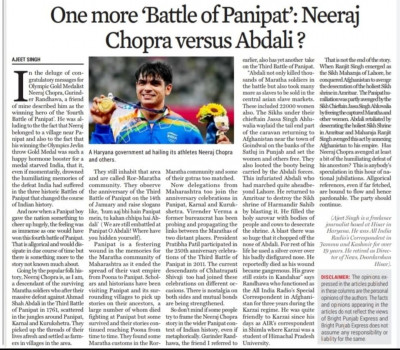 Caste or Race. Please keep sports free of them

For promotion of sports, keep it away from politics

Identity politics is integral to India- more now than ever before

Nicely articulated post. sports is a unifier. it must always be the same

Rajat Ghai writing in Down to Earth cited tweets (some of which you can see in screenshots posted above) how different caste groups have tried to claim Neeraj Chopra ( Link -https://www.downtoearth.org.in/blog/governance/how-golden-boy-neeraj-chopra-got-caught-in-india-s-caste-cauldron-78344) to opine that cancer caste is alive and kicking in India.

Neeraj Chopra comes from Haryana's Panipat and his native village is Khandra (https://villageinfo.in/haryana/panipat/panipat/khandra.html). And if you want to know more about Neeraj Chopra the sportsperson, my friend and ex-colleague from Hindustan Times, Asheesh Sharma had done an excellent interview with him (https://www.hindustantimes.com/brunch/pm-modi-mark-zuckerberg-all-messaged-me-says-junior-javelin-world-champ-neeraj-chopra/story-5uITOtniwhY3Ng3AMeJRhP.html) five years back wherein he stated that Chopra's ancestors had come from Maratha heartland to swing sword for Peshwa Baji Rao in the third battle of Panipat (1761) against Afghan warlord Ahmad Shah Abdali and then settled there. In Haryana now they are now known as Ror Marathas.

If caste battles over Neeraj Chopra were not enough, Punjab chief minister Captain Amarinder Singh brought out (https://www.ndtv.com/india-news/amarinder-singh-announces-rs-2-crore-for-neeraj-chopra-cites-punjab-link-2505211) his Punjabi roots to announce a cash reward for him. Punjab is poll-bound, so no wonder Captain is eager to brandish his so-called Punjabi roots. But later in a tweet Captain said (https://twitter.com/capt_amarinder/status/1424020602201862145?s=19) Chopra is serving in Army (he is a Subedar) and it's a proud moment for armed forces and annouced a cash reward for him.

May be Captain thought it's better to harp on his own army roots and also Chopra's to please army/ex-army personnel in Punjab as the state goes to poll next year.

Another poll-bound state UP too has announced to felicitate Chopra and six other athletes who won medal in Tokyo (https://firstindia.co.in/news/india/Cm-yogi-adityanath-hails-champions-neeraj-bajrang).

In Haryana where caste battle lines are often drawn over Jat vs non-Jat politics, Neeraj's caste identity has become a topic of debate. Initially thought to be a Punjabi Chopra (whose ancestors came from Pakistani Punjab at the time of partition to settle down in Haryana along GT Road in Jat heartland, now there is a talk about his Ror Maratha identity.

And in the middle of this caste-identity politics stand the shining the lone Indian Gold medal of Neeraj Chopra. So now tell me who wants to claim it as an Indian?