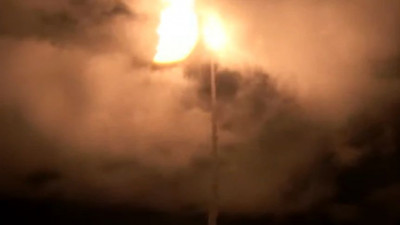 NASA has successfully launched its first rocket from Australian soil in more than a quarter of a century.

After rain and wind delayed the launch by more than an hour, the suborbital sounding rocket took off just after midnight on Monday morning from the newly constructed Arnhem Space Centre, on the remote eastern edge of the Northern Territory.

The rocket — which is expected to fly about 300 kilometres into space above Arnhem Land — is conducting astrophysics studies that can only be undertaken in the Southern Hemisphere, NASA said.

Around 100 VIPs — scientists, politicians, local community members, Indigenous leaders and the media — were shuttled out to view the launch pad just after lift-off, from a viewing platform about 800 metres away and not far from the site of the annual Garma Festival.

One person watching on was Yirrkala School co-principal Merrkiyawuy Ganambarr-Stubbs, who said it was "unbelievable for something like this to happen here on Yolngu country".

"It was in the blink of an eye, but to me, it was like it was in slow motion because the whole area just lit up," she said.

"It went up, and then the sound, it was just like a rumbling boom, like nothing I've ever heard.

"And I just shook with amazement."

The rocket was visible for about 10 seconds, until just before it exited the earth's atmosphere.

Others in the nearby township of Nhulunbuy also had a chance to catch a brief glimpse of the rocket on its journey skyward, as did residents in nearby remote Yolngu communities and homelands.