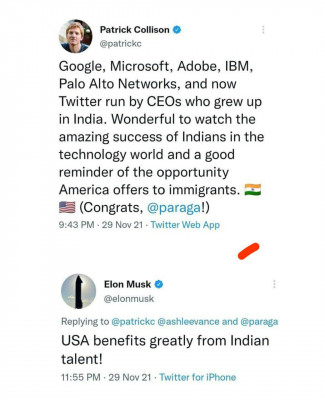 As the news of Parag Agrawal's appointment as the new CEO of Twitter broke out, Tesla CEO Elon Musk shouted out to the Indian talent.

The outgoing Twitter CEO Jack Dorsey announced on Monday that Parag Agrawal was appointed as the new chief executive officer of Twitter.

"Indians are at the forefront of world knowledge today in two areas. 1) The development of Information Technology (IT). 2) Yogic spirituality and the search for universal consciousness. If both can be combined, we can create the basis for a higher planetary civilization", tweeted famous American author Dr David Frawley.

It's indeed a proud moment for us as a nation but a moment of self-introspection too as to what is making our best leave the country and what will reverse this trend in years to come.

A country with its best talent leaving will not win big!