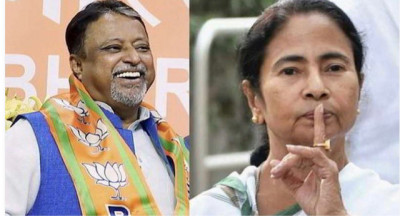 Edited by Subhash Pathak
Kolkata: In a big blow to Bharatiya Janata Party (BJP) in West Bengal, its all-India Vice President and MLA Mukul Roy joined the Trinamool Congress on Friday along with his son Subhrangshu Roy, almost four years after deserting the Trinamool camp for the saffron brigade.

Chief Minister Mamata Banerjee, who was present at Trinamool Bhavan during the meeting to induct Roy back into the party fold, said that more people will come out of the BJP and join the Trinamool Congress.

Roy and his son were greeted back into the Trinamool by its all-India General Secretary, Abhishek Banerjee.

“Mukul (Roy) is our old member and he has come back. He was not in a good condition in the BJP because the saffron party created pressure on him through agencies, as a result he was not in mental peace. I was watching that his health condition had also deteriorated because one cannot stay in the BJP. It is a heartless party and no human being can stay there,” Mamata Banerjee said.

Roy, who had left Trinamool Congress in 2017, said, “I am having a nice feeling for being among familiar people again. This has a kind of homely atmosphere. I am confident that West Bengal will again reach to the top under the leadership of our leader and Chief Minister Mamata Banerjee.”

When asked what made him return to the Trinamool, the former all-India General Secretary of the party said, “I shall not work for the BJP again, so I have come back here.”

Hinting that more people from the BJP are likely to join the Trinamool, the Chief Minister said, “Trinamool will welcome everybody who is sober and gentle. But there are some people who betrayed the party before the elections and badmouthed the Trinamool leaders.”