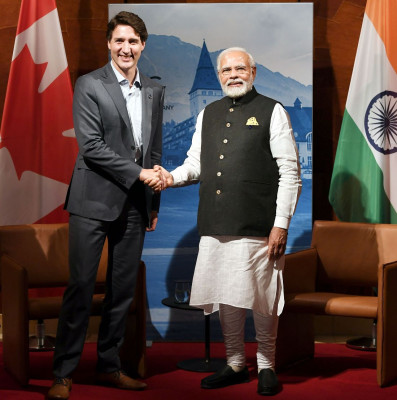 Prime Minister Shri Narendra Modi held a bilateral meeting with the Prime Minister of Canada, H.E. Mr. Justin Trudeau, on 27 June 2022 on the sidelines of the G7 Summit in Schloss Elmau, Germany.

As Leaders of robust democracies with shared values, they had a productive meeting in which they discussed India-Canada bilateral relations and agreed to further strengthen trade and economic linkages, cooperation in security and counter-terrorism, as well as people-to-people ties.

They also exchanged views on global and regional issues of mutual interest.

"Prime Ministers narendramodi and JustinTrudeau meet on the sidelines of the G-7 Summit in Germany. They took stock of the India-Canada friendship and discussed ways to further strengthen it across various sectors."