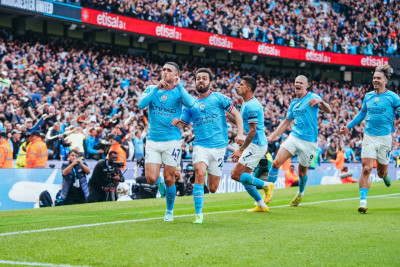 Phil Foden who has always been a major part of  Manchester City's plans right since the day he made his debut for the club. The 22 year old once again proved in today's game as to why he is rated so high amongst the youngsters presently in Europe.

Foden was a highly impactful player in the match both with his brilliant creative play to bring in goal scoring chances and also scoring them on his own. Foden bagged in a memorable hat trick to put his side in front.

Besides this he also registered two assists to ensure that his team never lost the momentum that was being built right from the first minute of the game. He was a part of all the counter attacks and contributed to his team's win in every manner.

1) Erling Haaland is the next big thing

Possibly the biggest topic of discussion today after the match and the topic which will cover the headlines tomorrow in the newspapers will be those related to Erling Haaland who's taken the football world by storm. The Norwegian scored a hat trick in today's game against united, which was his third hat trick in his debut season with City.

By doing so the 22 year old broke several records. He became the first player to score three consecutive hat-tricks while playing at home. His goal scoring prowess literally shook the opposition as he just rushed past the opposition defenders netting the ball time and time again. He also proved his worth as a creator as he assisted Phil Foden twice thereby helping him to regisya hat trick as well.

Haaland also became the fastest player to score three hat-tricks having done so in just his 8th Premier League appearance. With such rich vein of goal scoring form, the striker is certainly going to break records one after the other by leading the goal scoring charts for fun.