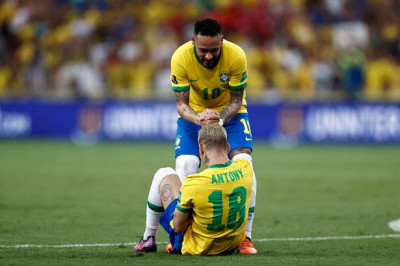 Manchester United winger Antony has claimed that Brazil teammate Neymar has helped him to play with 'confidence' and that it's 'important' to be working with him.

Antony arrived at Old Trafford from Ajax in the summer transfer window in a deal rising to €100million (£85.5m). The 22-year-old signed a five-year contract with the option of an additional year, becoming the club's second-most expensive signing.

The Brazilian attacker scored on his United debut earlier this month as Erik ten Hag's side secured a 3-1 victory over Arsenal, with Marcus Rashford also grabbing a brace. Antony has made nine appearances for his country and was part of the side that won Olympic gold last year in Tokyo.

The United man will be competing with a number of high-quality players for a starting position with Brazil at the World Cup in Qatar next month. Despite making fewer than 10 appearances for his country so far, Antony has insisted that he has always been welcomed by his teammates — especially Neymar.

"For us youngsters it’s very good, a guy who is a leader, gives that confidence to all the players. I’ve been saying this since my first call-up, he [Neymar] came to me and told me to show all my football, so it’s very important to be working with him,"

The 22-year-old also suggested that his summer move to Old Trafford will benefit Brazil and his own World Cup prospects, stating that playing in the Premier League will make him sharper and a more dangerous player for his country.

He added: "I am very happy to be at Manchester today, it does have a weight, because of the Premier League, everyone knew it would be a more difficult challenge.

Antony is currently preparing with the Brazil squad ahead of their upcoming fixtures with Ghana and Tunisia later this month.