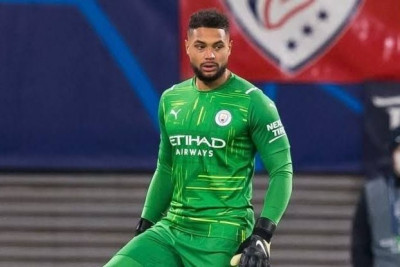 Sean Johnson has been called up to the squad to replace the shot-stopper for four
upcoming games.

The USMNT have four matches lined up in the upcoming weeks to get into shape
ahead of Qatar 2022. But they will not have their first-choice shot-stopper available after
he withdrew for family reasons.

Steffen out of USMNT squad

NYCFC’s Sean Johnson has been called to replace Steffen on the USMNT roster,
joining Matt Turner and Nottingham Forests’ Ethan Horvath as the nation’s three
goalkeepers.

“U.S Men’s national team head coach Gregg Berhalter has added goalkeeper Sean
Johnson to the training camp roster to prepare for June friendlies and the start of its
CONCACAF Nations League title defence,” the USMNT confirmed in a statement
published on its official website.

“The BioSteel USMNT Training Camp roster will begin reporting to the camp in
Cincinnati this weekend. Johnson replaces Manchester City goalkeeper Zac Steffan,
who has had to withdraw from camp for family reasons.”

The United States face Morocco on Wednesday before taking on Uruguay in
back-to-back friendlies, then moving on to play Grenada and El Salvador in the
CONCACAF Nations League.

Steffan faces competition for the starting role in the 2022 World Cup to take place in
Qatar after Arsenal-bound Turner’s terrific run in 2021 at the club and international
levels.

His absence could give Turner further opportunity to prove himself between the posts as
the tournament draws closer. Steffen’s errors in recent months, most notably in the FA
Cup semi-final, have not helped his case either.