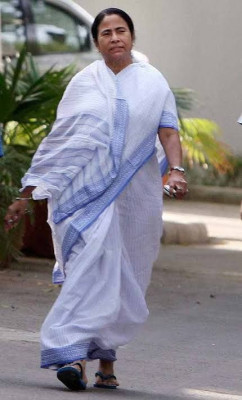 Mamata Banerjee's ambitions to spread the Trinamool Congress footprints outside of West Bengal is beginning to cast a shadow on prospects of a non-BJP formation being put in place ahead of the 2024 general elections.

The TMC leader has already blown the "Khela Hobe" trumpet in states including Tripura, Assam, Uttar Pradesh and Goa. Pursuing a "grounds up" strategy, Banerjee has been attempting to leverage the success of West Bengal to emerge as an All-India party. All too splendid. Except for the fact that Bannerji's recent moves in poaching Congress leaders has hurt the Congress and seemingly been compromising the goal of stitching together an anti BJP platform. In the last three months alone, three Congress leaders have joined the TMC: Sushmita Dev, Abhijit Mukherjee and Shikha Mitra. In the run up to the assembly elections in Goa, there are strong rumours that a senior Congress leader will hop over to the TMC. A delegation of TMC leaders along with volunteers of Prashant Kishor's I-PAC team is scheduled to visit Goa shortly to oversee the operation.

The TMC leaders have also been in informal talks with other political leaders in Goa including those from the Goa Forward Party (GFP), an estranged ally of the BJP. GFP president Vijay Sardesai had said in July that the Congress had agreed in principle to an alliance with it. However, the Congress leaders have remained non committal in the matter  so far.

Banerjee has also been engaged in serious efforts to make inroads in the three North eastern states of Tripura, Assam and Meghalaya. The TMC leaders are said to have been in touch with Akhil Gogoi of the Rajor Dal in Assam and Pradyot Manikya of the Indigenous Progressive Regional Alliance in Tripura.

All the three North Eastern states have a sizable Bengali population (65 percent in Tripura, 28 percent in Assam and 9 percent in Meghalaya).The TMC may not make big gains in these states in the immediate future, but the party does seem to be making the right moves. Except that prospects of the setting up of a Congress-led anti BJP front in 2024 are turning hazy.