Liverpool failed to score against the 10 man Arsenal defence 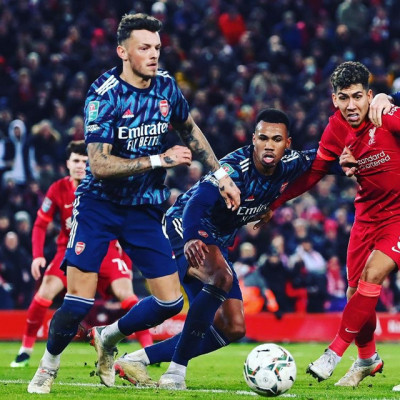 Liverpool met Arsenal for an interesting semi-final first leg of the EFL Cup. The match was postponed by a week due to a Covid outbreak at the Liverpool football club. Liverpool failed to score a single goal in the tie and the game was 0-0 at the end of 90 minutes.


Both the teams had some of the important players out for the fixture due to the Africa Cup of Nations. Salah, Mane, Partey, Pepe and Aubameyang missed the fixture and are expected to miss some more club games due to competition.


Liverpool witnessed the importance of Mane and Salad at the front as they failed to score a single goal. Arsenal was down to 10 mins in the 25th minute when Xhaka made a high foot tackle to Jota. Arteta instantly changed the formation of the team to 5-3-1. He also made a change by taking Nketiah out and bringing Rob Holding in. Arsenal was down to 10 men for more than an hour.


Liverpool had 17 shots in the whole game as compared to just 3 shots by Arsenal. They had 78% possession in the whole game. The clear dominance was seen in the game but the strong defence of Arsenal didn't allow Liverpool to score a goal. Ben White had some exquisite marking as well as clearance in the second half of the game. Ramsdale was the backbone of the defence.


Arsenal just had 95 passes in the game. Liverpool had 583 passes in the whole game. These stats proved that Arsenal was not attacking at al. They were sitting behind and their main goal was to hold Liverpool.
They will face again next week.


The winner of the second leg will face Chelsea in the EFL Cup finals at Wembley. Both the teams will be having their Premier League fixtures over the weekend.