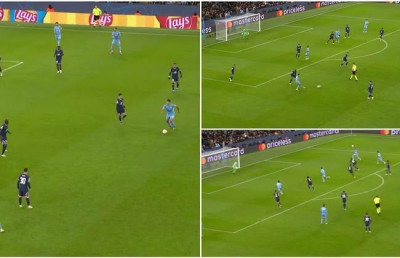 Lionel Messi has been criticised by a number of pundits following Paris Saint-Germain's 2-1 defeat to Manchester City on Wednesday evening.

Rafael van der Vaart is one pundit that has questioned his work-rate.

"It makes me sad," Van der Vaart said on Dutch TV channel Ziggo Sports, per Marca. "It's a question of desire. Does he [Messi] want it or not?

"When you compare him to Cristiano Ronaldo, one is fighting to take his team to the next level - and one isn't.

"Messi walks now and then. I look at him and think, 'Aren't you ashamed?'

"I'm just getting annoyed with Messi. It already started a bit with Ronald Koeman [at Barcelona]. It was actually a refusal to work, that is not normal for such a player.

"And that's a shame, because a player like this will never be born again."

City had the ball in PSG's third for around 30 seconds before the goal.

But, despite City being in such a threatening position, Messi barely moved to close down the ball.

That isn't the greatest look.

It's well known that Messi doesn't have too much time for pressing. But, when you lose a big game like PSG did yesterday, it's not much of a surprise the moment has been highlighted.

PSG's defeat means they will finish second in group B, behind Man City.

The French giants could be in line for a very tough last-16 tie. Liverpool, Bayern Munich and Chelsea are among the teams they could be drawn to play against.