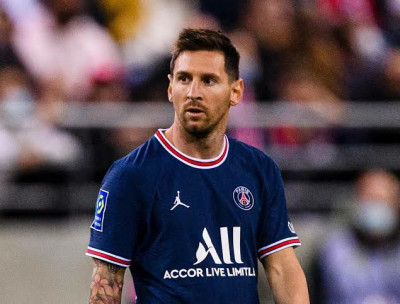 The Argentina international drew another blank as the newly-crowned Ligue 1 champions were held at Parc des Princes.

Lionel Messi's misfortune at Paris Saint-Germain continued in their draw against Troyes as the forward hit a remarkable milestone.

Troyes battled back from two goals down to secure a 2-2 draw at Parc des Princes on Sunday, with goals from Ike Ugbo and Florian Tardieu cancelling out early efforts from Marquinhos and Neymar.

Messi extended his recent scoreless run to three games, but not for the want of trying, as the seven-time Ballon d'Or winner struck the woodwork twice on a frustrating night for the newly-crowned Ligue 1 champions.

Messi has only managed to score four goals in his debut season in Ligue 1, albeit while also recording 13 assists and hitting the upright on numerous occasions.

After being denied by the post and bar against Troyes, Messi has now struck the woodwork 10 times in 2021-22, more than any other player since the beginning of Opta statistics for the competition back in 2006-07.

What did Pochettino say about the 2-2 draw?

Mauricio Pochettino wasn't unhappy with Messi and the rest of his PSG attack after the game, however, with it his belief that individual mistakes at the back proved to be more costly than their missed chances.

"I think we had a good game," the head coach told Amazon Prime Video. "We made two mistakes, that's why we didn't win. We dominated the game, we had chances but those two mistakes cost us the three points."

PSG will now look forward to a trip to Montpellier before lifting the Ligue 1 trophy at Parc des Princes after a clash with Metz on the final day of the season.