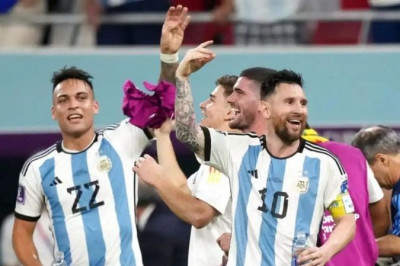 England star and one of the greatest British goalscorers of all time Gary Lineker has been left in awe of Lionel Messi and his Argentina side in the FIFA World Cup 2022. Lineker has drawn comparisons with Diego Maradona's 1986 team, stating that Maradona's side was incredibly hard to play against and they relied upon the magic of Maradona to win games.

Lineker's comments came after Argentina qualified to the quarterfinal of the FIFA World Cup after defeating a spirited Australian side by 2-1 margin. Speaking on a BBC show, Lineker said that the current Argentine team has the ability to endure tough games.

"It does remind me a bit of 1986 and the side with Maradona. Hard to play against, tough and enduring tough games and seeing their way through. They were difficult to beat and relied on the magic of Maradona. There are so many similarities," the  player said.

"Maradona was at his peak, Messi is obviously coming to the end of his career. But can they do it?"

On the night, Lionel Messi possibly played one of his best World Cup games, the 35-year-old former Barcelona player singlehandedly took on the Australian defence at times. He scored one goal and set several of his teammates up in scoring positions, but Argentina failed to capitalise on the same.

Messi's goal on the night was his classic move, playing a quick one-two and then firing a low curler as the Australia defenders surrounded him. The ball ended up into the far bottom corner of the goal, which broke the deadlock on the night. Premier League's greatest goalscorer Alan Shearer spoke about the effort and said that Messi's awarness of the space around him was incredible.

"The way Messi works that space. The way he carries the ball when there is much going on around him. He's got everything. Whenever he gets the ball the whole stadium gets on its feet. It doesn't matter where he is on the pitch, the whole stadium rises," Shearer said.

Argentina will now face Netherlands in their quarter-final fixture of the tournament.