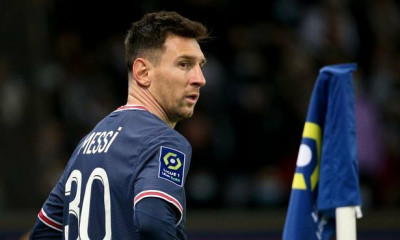 Wednesday was another frustrating night for Lionel Messi and Paris Saint-Germain as they underwhelmed in a goalless draw at home to Nice in Ligue 1.

Messi has has found it difficult to adapt to French football in the opening half of the campaign following his high-profile summer transfer from Barcelona.

The Argentine superstar – fresh from collecting his seventh Ballon d'Or title as he scooped the 2021 accolade on Monday night – once again failed to match his sky-high expectations.

It was just the fifth time he has completed a full 90 minutes of league action for Les Parisiens but he failed to add to his solitary goal scored in Ligue 1.

Messi netted in last month’s 3-1 win over Nantes but is now at risk of failing to net over 20 league goals in a single league campaign for the first time since the 2007/08 campaign – when he scored 10 times in La Liga.

It is unsurprising, given the 34-year-old’s track record and remarkable level of stardom, that his below par performances are now beginning to draw criticism in France.

Leading sports newspaper L’Equipe gave a damning analysis of Messi’s performance on Wednesday night, one which they believe mirrors his time so far in the French capital.

The daily paper wrote that Messi is giving "the impression that he always plays at the same slow pace and, on occasions, seems disconnected" from his teammates.

Le Parisien were similarly damning of the performance, but directed their ire more towards the team as a whole and coach Mauricio Pochettino.

The outlet proclaimed: "The game of Mauricio Pochettino's team is slowly heading towards nothingness."

Of course, this needs to be put into context – Messi has scored three Champions League goals for PSG, helping them through to the Round of 16.

Wednesday night was just the third time in 16 Ligue 1 games this season in which they have dropped points, and their lead at the top of the standings remains in double digits.

However, there is little doubt that their level of performance has fallen far below expectations both domestically and in Europe.