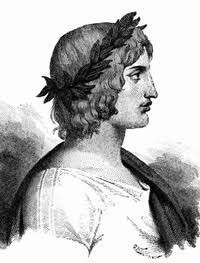 Virgil, Publius Vergilius Maro (full name in Latin), (born October 15, 70 BCE, Andes, near Mantua [Italy]—died September 21, 19 BCE, Brundisium) was a Roman poet, best known for his national epic, the Aeneid.
He was regarded as the greatest poets by the Romans and this reputation of his has been agreed to by the subsequent generations.
Aeneid his epic poem, tells the story of Rome's legendary founder and it holds the doctrine that its the Romans duty to civilize the world under the divine guidance.. His reputation as a poet endures not only for the music and diction of his verse and for his skill in constructing an intricate work on the grand scale but also because he embodied in his poetry aspects of experience and behaviour of permanent significance
Virgil's love of the Italian countryside and of the people who cultivated it colours all his poetry. He was educated at Cremona, at Milan, and finally at Rome, acquiring a thorough knowledge of Greek and Roman authors, especially of the poets, and receiving a detailed training in rhetoric and philosophy. It is known that one of his teachers was the Epicurean Siro, and the Epicurean philosophy is substantially reflected in his early poetry but gradually gives way to attitudes more akin to Stoicism.

His poetry became famous among the Romans for two reasons, firstly because he was considered to be their national poet and the one who spoke about their ideas and achievements. Secondly because he had reached the ultimate perfection of his art. His poems were taught in schools and even the the 1st-century Roman critic and teacher Quintilian recommended that the educational curriculum should be based on Virgil’s works. A few years after his death, Virgil was being imitated and echoed by the younger poet Ovid, and this process continued throughout the Silver Age. Virgil’s influence on English literature has been enormous. The Aeneid was the model for John Milton’s Paradise Lost not only in epic structure and machinery but also in style and diction.