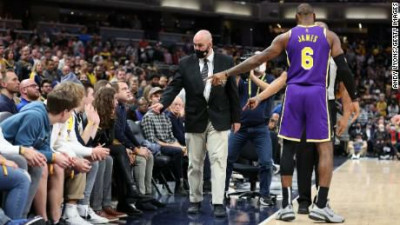 A season-high tally and getting two fans ejected -- a return from suspension was always going to make LeBron James the center of attention, but even by his standards, Wednesday night was eventful.

The LA Lakers star was back on court for the first time following his second-ever career ejection against the Detroit Pistons on Sunday, and the 36-year-old exorcised any leftover frustrations in a 124-116 overtime victory over the Indiana Pacers in Indianapolis.

Despite the absence of Anthony Davis, through illness, James stepped up with a season-high 39 points -- seven of which came in overtime -- as well as six assists and five rebounds to drag his team over the line.

Point guard Malcolm Brogdon led scoring for the Pacers with 28 points, seven rebounds and two assists, as Indiana falls to 8-12 in the East.

The Lakers trailed for the majority of the game, only nudging ahead for the first time late in the fourth quarter before two three-pointers in the closing 30 seconds from Pacers pair Justin Holiday and Chris Duarte sent the game into overtime.

Enter James: the 17-time All-Star sinking two clutch triples en route to outscoring the Pacers on his own in OT, as the Lakers held their nerve to even their season record at 10-10.

There was another ejection at a Lakers game, but this time it wasn't a player. On Sunday, James was ejected after he made contact with Pistons star Isaiah Stewart in the face -- an altercation that sparked a confrontational reaction from Stewart and an on-court scuffle.

Stewart was subsequently hit with a two-game suspension by the NBA for "escalating" the situation and "repeatedly and aggressively" pursuing James, who himself received a one-game ban for "recklessly hitting" the Pistons center in the face.

Midway through overtime against the Pacers, James spoke to the referee and appeared to gesture at two fans sitting courtside. The pair were subsequently escorted out by security from Gainbridge Fieldhouse.