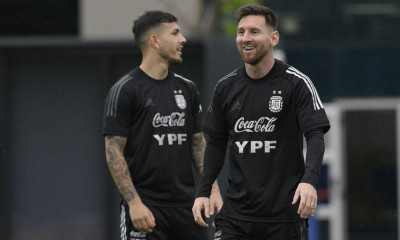 The entire footballing world was shocked when Messi left Barcelona in the summer transfer window of 2021 due to the club’s inability to renew his contract owing to the financial situation.

With Messi available on a free transfer, PSG acted swiftly to secure his signing, handing the 34-year-old a two-year contract with an option of an extra 12 months.

It has not been the best of starts to life in France for Messi, who has had to go through some ups and downs. But, ultimately, the seven-time Ballon d’Or winner helped Les Parisiens reclaim the Ligue 1 title after having lost it last season.

Now, Paredes, who plays with Messi for PSG and Argentina, has opened up on how the summer transfer transpired, revealing that at one moment, it looked all set that the global superstar would be renewing with Barça before there was a sudden U-turn.

“We had seen him in Ibiza the day before, and the next day he was leaving to sign with his club, that was it. We insisted: ‘come with us’, but he told us: ‘ I already have everything arranged, tomorrow I will travel to sign,” said Paredes.

“Then I don’t know what happened on that trip to Barcelona, ​​because the same night he was going to sign the contract he told us he was coming here,” he added.

“When he told me that he had already arranged everything and that he was going to Paris to sign the contract, I told him: ‘I will not believe you until you sign and I see you with the Paris Saint-Germain shirt,'” Paredes further said.

In his debut season in France, Messi has made 32 appearances, scoring nine goals and setting up 13 more.