L.A. Will ‘Definitely’ Have Interest If 76ers Let Go Of Doc Rivers 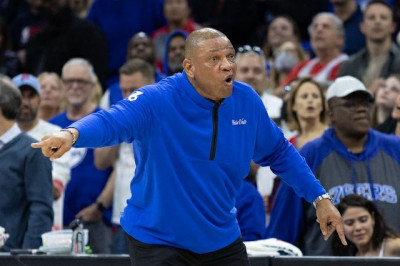 The Los Angeles Lakers are in the midst of their search for their next head coach with a number of names being mentioned as possibilities and some interviews already taking place. Now, thanks to recent playoff developments, one of the initial potential candidates mentioned, Philadelphia 76ers head coach Doc Rivers, is finished with his season after they were eliminated by the Miami Heat in the Eastern Conference Semifinals.

Rivers was one of the first names mentioned as someone the Lakers would look at should he become available and he does check many of the boxes the Lakers are looking for. Rivers is a championship-winning coach who has plenty of experience handling the egos of big superstars throughout the NBA.

Now that Rivers’ season in Philadelphia has ended, the rumors are already picking up about a potential union between himself and the Lakers. ESPN’s Brian Windhorst made an appearance on Get Up and said that the Lakers will definitely have interest in Rivers should he become available:

Doc Rivers is under contract for next year. However, there is a team in Los Angeles, the Lakers, who are watching the developments closely over the next couple of days. If the Sixers elect to make a change there, and it’s a possibility, it also depends on where the ownership is about potentially paying out Doc Rivers’ contract, where Daryl Morey is about wanting to replace, remember Morey didn’t hire Doc Rivers.

But if Doc Rivers becomes free, the Los Angeles Lakers will definitely have interest. Now they have a process, they have numerous candidates, but he will immediately become a leading contender to get that Laker job. I don’t believe Doc Rivers is interested in coaching anywhere besides Philadelphia or Los Angeles next year.

Rivers still has three years and $24 million remaining on the five-year contract he signed with Philadelphia in 2020 so, as Windhorst noted, the 76ers ownership would have to pay out a hefty amount in order to part ways with the coach.