Kurt Rambis is just in charge of the Lakers now 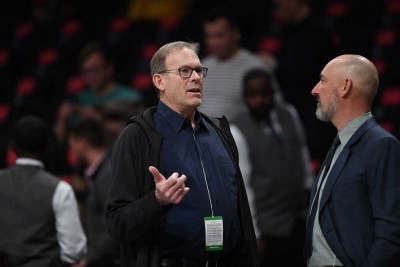 In “leaks so funny I could not possibly make them up,” Lakers senior basketball advisor Kurt Rambis has inserted himself into the Frank Vogel hot seat saga in the most hilarious ways imaginable.

It’s been long known that Rambis wields more power in the Lakers’ front office than his “senior basketball advisor” title would suggest, but I will admit that even I had no idea he was this prominent of a voice until today.

First, Bill Oram and Sam Amick of The Athletic reported that Rambis had basically threatened the jobs of everyone on the coaching staff if things didn’t get better for the team (emphasis mine):

The coaching staff has been well aware that it faced significant pressure for months. Sources say that was made clear to the staff early on this season by Kurt Rambis, the former Laker and current director of basketball affairs who has become one of the most influential members of the organization since returning to the franchise in 2017.

Yet not long after Rambis relayed the word that they were all at risk of being replaced if things did not improve, COVID complications made it nearly impossible for the Lakers to continue evaluating Vogel because, among other reasons, he wasn’t there. He entered the league’s health and safety protocols on Dec. 19 and didn’t return until Dec. 31.

That, in and of itself, didn’t raise that many eyebrows. Again, it was well known that Rambis was involved, even if it was a little surprising that he was feeling powerful enough to threaten the jobs of the entire coaching staff.

But then, a few hours later, Dan Woike and Brad Turner of The Los Angeles Times reported that not only is Rambis powerful enough to browbeat the coaching staff, but he’s also been empowered to sit in on their meetings and make suggestions when he doesn’t like how things are going.