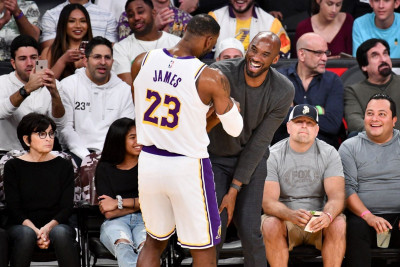 LeBron James is the sole reason why the LA Lakers continue to be in the playoff hunt despite some hugely disappointing performances. At 37-years-old and playing in his 19th season, he has put the Lakers on his broad shoulders for a chance to win every game. James has done practically everything he can to bring more glory to the storied NBA franchise.

Checking the stat sheet in the middle of a losing game probably isn’t one of those things he should do to help the LA Lakers win. A video of LeBron James going over the stat sheet in the loss to the Memphis Grizzlies went viral. Former Laker Kwame Brown ripped the four-time MVP for doing something the late Kobe Bryant would not even think about.

Here’s Brown on LeBron James' fact-checking act during a timeout:

"It’s like what are you really doing? What are you really out here for at this point? Because that’s not basketball and that summed it up why the Lakers are losing in my opinion. They are not a team. They are a bunch of guys out there, trying to get their numbers.”

LeBron James has not given any explanation as to why he was looking at the stat sheet. But the image of Russell Westbrook’s worried face only added layers of interpretation and hilarity to the scene. King James could simply be looking at what their team has been doing or not doing to turn the game around.