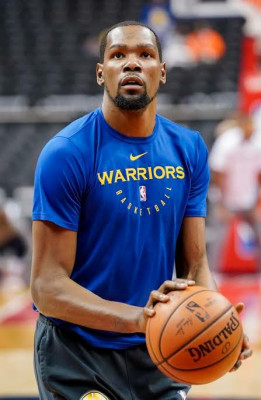 BOSTON -- Nets star Kevin Durant said it "means the world" to him to pass Hall of Famer Allen Iverson for 25th on the NBA's all-time scoring list during Brooklyn's 123-104 victory over the Celtics here at TD Garden on Wednesday night.

"I mean, it means the world. I dedicated my life to this game at an early age ... so I watched all these guys that I'm like passing up," Durant said after scoring 21 points for the Nets, who improved to an Eastern Conference-leading 14-5.

For Durant, the meaning of passing Iverson is two-fold. Not only was he a kid when Iverson first exploded onto the NBA scene in the 1996-97 season, but growing up in the Washington, D.C., area, he got a front-row seat to Iverson's college exploits at Georgetown.

Durant said that growing up, even when playing center on his childhood teams, he was still trying to emulate Iverson's signature crossover.

"I really became a huge Iverson fan, obviously, just like everybody else his rookie year. But seeing him at Georgetown and playing for coach [John] Thompson and that whole culture that they built there, he was a huge part of that," Durant said. "But once he came to the league, he had players ... I was a center, power forward on my young team, and we all were long crossing and double crossing. He influenced a lot of people.

"So to pass him on the list and to be up there with some of the greats on that list is incredible. I've just got to keep going."