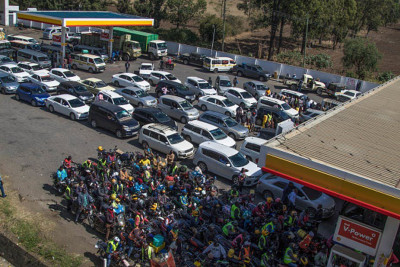 Oil is an essential commodity for Kenya’s transport and industrial production, electricity generation and water provision. In 2008, as the world grappled with high oil prices, Kenya introduced price controls to cushion the blow for its citizens. The controls worked for over 10 years. But, since the start of April, there have been intermittent fuel shortages in the country. Job Omagwa has studied oil marketing and price controls in Kenya. We asked him to unpack the current fuel shortage.

How does Kenya get its fuel?

Kenya, like most of its East African neighbours, depends on imported refined petroleum products (petrol, diesel, jet fuel and kerosene) mainly from the Middle East. Oil marketing companies are the importers. The state estimates demand for the next import cycle and issues an open tender for the supply of petrol, diesel and kerosene.

Official records show that in 2021 the country imported 6.149 million litres of refined petroleum worth US$3.48 billion. The imports came mainly from the United Arab Emirates (US$ 1.41bn) and Saudi Arabia (US$1.14bn). Other sources included India, the Netherlands and Kuwait.

The tender is only open to the country’s 93 oil marketing companies. The winner orders the products, which it stores and distributes via the network of the state-owned Kenya Pipeline Company to other marketers, according to demand quotas.

The established marketers do not have a countrywide reach. Smaller players have cropped up to fill that gap. These small retailers get their fuel from the established oil marketers.

How are the oil prices set?

The government implemented a maximum price cap in 2011. It did this because marketers had raised the price of fuel in response to increases in international crude oil prices between 2007 and 2008, but didn’t reverse them when international prices fell at the end of 2008.

The price cap is managed by the Energy and Petroleum Regulatory Authority.