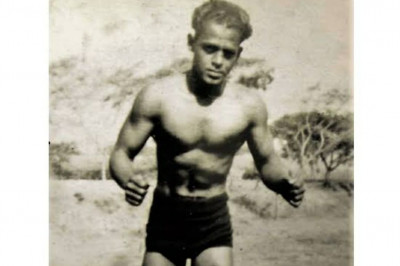 KD Jadhav or Khashaba Dadasaheb Jadhav was the first athlete from independent India who won an individual medal (bronze) in the Olympics. He won the bronze medal as a wrestler in the 1952 summer Olympics which were held in Helsinki. He competed in the bantamweight 57 Kg category & was coached by Rees Gardner who was a former lightweight champion himself from the United States. KD Jadhav is the only Olympic medallist who never received a Padma Award. He was born in a village called Goleshwar in Karad taluka of District Satara in Maharashtra State where he was the youngest of the five sons of a renowned wrestler Dadasaheb Jadhav. He even participated in the Quit India Movement where he provided shelter and a hiding place to the revolutionaries & circulated letters against the British. Although the Indian hockey team bagged a gold medal in the 1952 summer Olympics yet he was the primary attraction of the Indian contingent which returned home after the Olympics.
In 1955 he joined the police force as a sub-inspector where he won several competitions held within the Police department and also performed National duties as a sports instructor. Despite serving the police department for twenty-seven years and retiring as an Asst. Police Commissioner, Jadhav had to fight for pension later on in his life. For years, he was neglected by the sports federation and had to live the final stages of his life in poverty. He died in a road accident in 1984, his wife struggled to get any assistance from any quarter.
He was honoured by making him a part of the torch run at the 1982 Asian Games in Delhi. The Maharashtra Government awarded the Chhatrapati Puraskar posthumously in 1992-1993. He was posthumously honoured with the Arjuna Award in 2001. The newly built wrestling venue for the 2010 Delhi Common Wealth Games was named after him to honour his achievement. There is a book named Olympic veer K D Jadhav which was written by Sanjay Dudhane in honour of his legacy.
Sources: Wikipedia & The Hindu