Katoto rewarded at the D1 Arkema Awards, 5 Parisiennes in the Best 11! 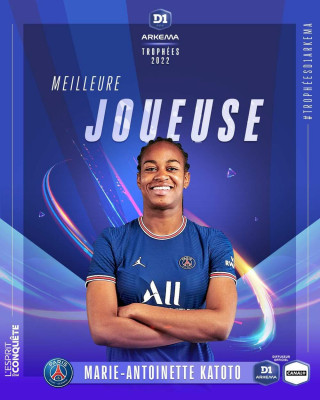 Player of the Year, five names in the Best 11 of the Year: Our Parisiennes honoured at the D1 Arkema Awards!

Just a few days after being named D1 Arkema Player of the Year at the Trophées UNFP, Marie-Antoinette Katoto has once again been selected for the award of the best player playing in France by the D1 coaches and captains.

Shortly after her award win, the forward spoke to PSG TV on what the award means to her: "Personally, it’s been a good season. There were several of us who deserved this trophy. I want to thank everyone who voted for me. It’s always important to win trophies even though I prefer team trophies. I always want to make even more of a difference and to continue to progress."

The club’s all-time top scorer also appears in the Best 11 of the 2021-2022 season, and is joined by teammates Kadidiatou Diani, Grace Geyoro, Paulina Dudek and Sakina Karchaoui.

"It’s always a source of pride to play in D1 Arkema and to feature in the Best 11.’" explained Les Rouge et Bleu’s n°7. "It comes as a reward for my season. From a personal point of view, being in a team where I feel comfortable is vital. Playing to my qualities and feeling free on the pitch is important. I am happy with our results this season, even though we haven’t won everything. I can’t wait for next season!"

Finally, the Trophée Coup de Cœur Arkema which is awarded to a community outreach project is awarded to the Paris Saint-Germain Foundation for "March of Equality" which put equality on the table for the 10 year anniversary of the programme "Allez les Filles!".

An excellent evening to cap off an impressive campaign for the club from the capital!