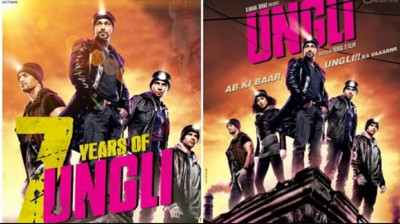 On Twitter, Dharma Productions posted the film's poster after seven years of 'Ungli', but cut Kangana Ranaut out of it, which angered the actress' fans. Reportedly Karan Johar and Kangana Ranaut have been feuding for more than four years now. It has been reported that an updated poster for 'Ungli' featured Emraan Hashmi, Randeep Hooda, Neil Bhoopalam, and Sanjay Dutt. Kangana Ranaut, who appeared along with Hashmi in the original poster, was not included in the new poster. The omission did not escape the notice of fans, who called out Dharma Productions and Karan.