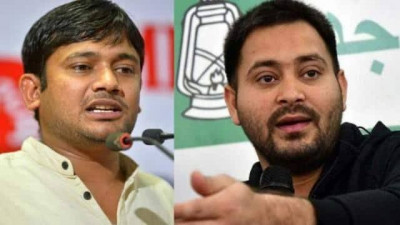 While the Congress is battling an intra- party tussles in Punjab, Chhattisgarh and Rajasthan, the recent induction of former JNU Students Union president Kanhaiya Kumar is causing ripples within  Bihar's "mahagathbandhan" as well.

The RJD and the Congress have already locked horns on the Kusheshwar Sthan seat - one of the two constituencies where by-elections will be held on October 30. While the RJD wants to contest the bypolls to both the Tarapur and Kusheshwar Sthan seats, the Congress has been pressing it's claim for the second seat. With Kanhaiya's entry, such tussles in Bihar's "mahagathbandhan"are likely to escalate.

Apparently, the Congress leadership will expect Kanhaiya to revive the moribund party apparatus in the state in the run up to the 2024 parliamentary elections. Splendid enough. But Kanhaiya and the Congress face big roadblocks from Lalu Prasad's RJD in particular. In the 2019 Lok Sabha elections that Kanhaiya had contested from Begusarai as a CPI candidate, the RJD had also fielded a candidate; leading to the victory of BJP's Giriraj Singh. In the 2020 assembly elections, the CPI and the RJD were both constituents of the "mahagathbandhan", but Kanhaiya and Tejaswi Yadav had not shared the platform even once. Till date, Kanhaiya has not publicly considered Tejaswi as a leader, nor has Tejaswi openly supported him. Political experts say that RJD chief Lalu Prasad is apprehensive that if Kanhaiya's popularity grows, Tejaswi Yadav's political future might get compromised. The RJD leadership is said to be peeved that Kanhaiya's induction happened without the RJD having been informed.

Kanhaiya is young and articulate, with the firepower and energy to mobilise the anti-BJP space, but is likely in coming months to face resistance not just from the RJD, but also from within the Congress state party unit.

The Bihar by elections are important in view of the razor thin majority with which the NDA coalition is in power. If the Mahagathbandhan wins the two seats and gets support from  smaller parties including the HAM, VIP and the AIMIM, it could well be within striking distance of the magical majority figure of 122 in the state assembly.