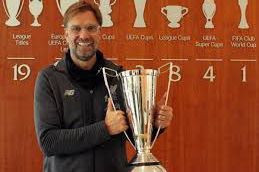 The award was given to the German after he led Liverpool to second place in the Premier League, one point behind Guardiola's Manchester City in a tense title chase. Klopp is the competition's Manager of the Season for the second time.

For the second time, Liverpool manager Jurgen Klopp has been named Manager of the Year by the League Manager Association (LMA). The award is named after Sir Alex Ferguson, the renowned Manchester United coach who won it a record five times throughout his tenure.

Klopp was named LMA Coach of the Year after leading Liverpool to FA Cup and EFL Cup victories.The Reds have also advanced to the Champions League final, where they will meet Real Madrid on Saturday evening in Paris with the hope of completing an unprecedented triple.

Klopp was presented with both trophies at an event sponsored by the LMA on Tuesday. "It was a little nervy, it wasn't the ideal finish for us, but we are already over it," the German remarked at the event when asked about Liverpool's Premier League season finale.

"And if you win an award like this, you're either a genius or have the finest coaching staff on the planet."

Guardiola and Klopp were two of the five nominees for the Premier League's award, voted for by the fans. Newcastle's Eddie Howe, Crystal Palace's Patrick Vieira and Brentford's Thomas Frank are the other three nominees for the LMA award.

We have five days to prepare for the Champions League final... losing the league today increased the desire to put it right next week. " Ferguson and England boss Gareth Southgate were both in attendance to give Klopp the illustrious LMA award.