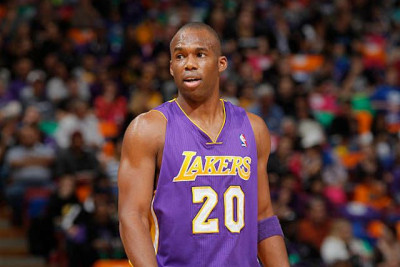 One of the more forgotten Los Angeles Lakers players who played extremely well during his time in purple and gold was Jodie Meeks. The sharpshooting guard was an extremely reliable player both as a starter and coming off the bench and had a career year in the 2013-14 season.

Meeks started 70 games for the Lakers that season, averaging 15.7 points, 2.5 rebounds and 1.8 assists, all career-highs for him while shooting 40.1% from 3-point range. Obviously that was a long time ago and Meeks has bounced around since then, not seeing NBA action since 2019 when he was part of the Toronto Raptors’ championship team.

Most definitely. I really enjoyed my two years with the Lakers, so reuniting would be something that I’d be more than happy to do. Aside from being a great locker room presence, I can clearly add shooting, and I’m also a hard-nosed defender. I can come in and give that extra effort off the bench that everybody saw they needed last season. Every team can use a shooter that can make shots for their superstars.”

Meeks is undoubtedly still a shooter and at 34 years of age still has something left in the tank. In 15 games in the G-League, Meeks averaged 10.3 points while knocking down 48.1% of his threes and it is well known that great shooting is ideal around LeBron James and Anthony Davis.

Meeks also was asked about this last Lakers season and what he felt went wrong for the team as a whole:

“I think injuries were a big part of it. It’s not fair to point to one thing or one person. A lot of things happen in an 82-game season. They had some personnel issues that didn’t fit the puzzle, and particular guys didn’t play that well — I’m not going to name anybody because it’s not important. I know that they want to play better, but they also have to get the most out of their personnel. Hopefully, next year will be a different story because Lakers nation is very passionate.