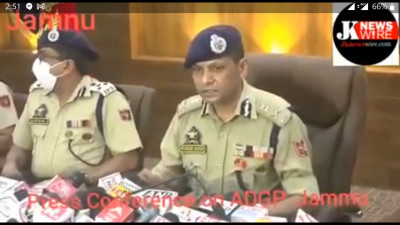 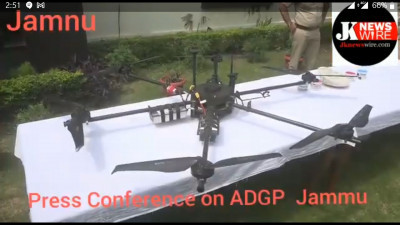 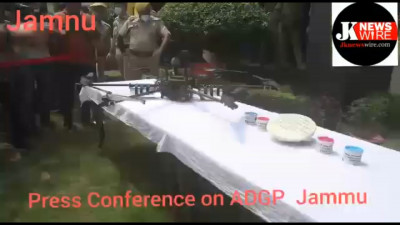 Ahead of President Ram Nath Kovind’s visit to Jammu and Kashmir starting from tomorrow, Jammu and Kashmir Police have foiled a terror plot executed by the Pakistan based Jaish-e-Mohammad outfit by shooting down one IED fitted drone near Akhnoor here in the city outskirts.
Speaking to reporters here at a press conference, ADGP Jammu Zone, Mukesh Singh said that major success has been achieved by foiling a terror plot executed by Pakistan's Jaish-e-Mohammad.
He said that Jammu Police shot down one hexacopter fitted with 5-kg IED near Akhnoor area.
The officer also revealed that the string recovered from the drone was similar to those used in attacks at Air Force Station Jammu.
The ADGP said that police had received a specific input that Jaish-e-Mohammad (JeM) was planning to drop a payload through a drone near Akhnoor, adding, “at around 0100 hours, police shot down the drone when it went down to drop the payload that was around 5 Kg IED material.”
“Jammu police have shot down a hexa-copter carrying a payload of IED material near Akhnoor area, the threads of which were similar as that of the one used for dropping payloads at Air Force Station Jammu,” Mukesh Singh said.
“The drone payload was ready to be triggered after it gets connected with wires,” he said, adding that the parts of the drone were made in China.
Preliminary analysis suggested that it was a hexa-copter with six wings fitted with a flight controller and GPS, the ADGP said and added that the packed IED was supposed to be dropped by drone and to be picked up by the receiver.
“Such drones can travel up to 20 km distance depending on the payload,” the ADGP said, adding that in the last one and a half years, Police have recovered 16 AK-47 rifles,magazines, 15 grenades and 18 IEDs airdropped by the drones in the region.
The ADGP said that the drone shot down at Kathua is an assembled one with its parts manufactured from Taiwan and Hong-Kong.