Jacquemus is linking with Nike to expand his impact 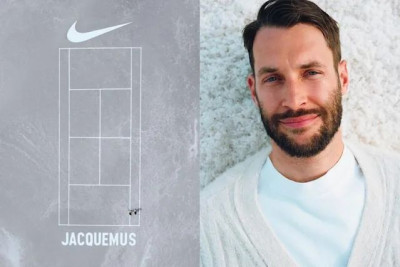 Vogue reports that Jacquemus is working on a collection with Nike, set to debut at the brand's next runway show, slated for June in Paris, before rolling out online and across Nike stores around the globe. There are 15 pieces spanning apparel, footwear and accessories, all of which will be available for purchase on June 28 on jacquemus.com.

“Sport was always super important in the Jacquemus DNA,” says Jacquemus from his Paris office, noting that sneakers grounded his 2014 and 2015 collections. “But as Jacquemus grew, the Jacquemus girl changed—she got heels!” he continues with a laugh. Still, something lingered in his mind. “I always said to myself, If I collaborate, it will be with Nike one day.”

Jacquemus x Nike is a summer collection consisting of unisex accessories and several women’s ready-to-wear items, from biker shorts to pleated skirts and halter-neck dresses. It will be unveiled at Jacquemus’s next physical runway show, scheduled for June. “For this collaboration with Nike, I wanted to create a collection that reinterprets athletic women’s sportswear in a minimalistic way. In addition, it was important for the collection to be accessible to all body shapes and that it blended Jacquemus style and Nike performance,” said Porte Jacquemus in a press release.

The two partners, keen to create more buzz around the project and whet their fans’ appetite and anticipation for the collection, have not yet released any pictures of the collaboration. Instead, they have only circulated a few teasers featuring the Nike x Jacquemus logo: a tennis court viewed from above, set on what looks like the sand by the seaside, with two intertwined female silhouettes.